Every year, North Country Animal League takes multiple stray dogs and cats who has needs that far surpass our budget for basic care. In situations like these, we turn to our Emergency Medical Fund (EMF). This fund is kept replenished by donations that we raise to help vulnerable animals in critical conditions that need urgent care, often requiring emergency surgeries. Without the EMF, we would have been unable to help animals like Acorn and Ally. 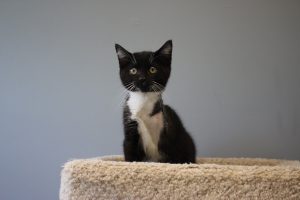 Acorn came to NCAL after we received a call from Lost Nation Brewery in 2017 about a kitten with an injured leg, in the midst of one of the worst kitten seasons ever experience since we opened our shelter. After numerous attempts to catch him, Acorn was finally trapped by NCAL staff and brought to the shelter. At first, poor Acorn was so frightened that we thought he was feral. However, with a little time, patience and bribery through food, he began to trust us and became very social and affectionate.

Sadly, the injury to his leg was irreparable and his leg had to be amputated. The surgery was successful and the very next day he was playing, using the litterbox, and was active. Within a week after his surgery, he was running around full speed in his foster home and playing with other kittens. Acorn is now healthy, happy and loving life in his forever home! 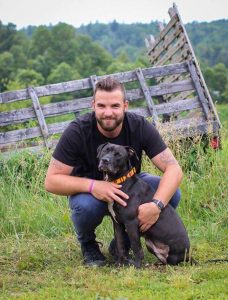 Ally came to Vermont in March of 2017 on a transfer as a rescue from a high-kill shelter in South Carolina, where she was placed after being hit by a car. Originally meant to go to a different shelter, her case was refused once they saw her condition. Knowing that her future would be short-lived if she returned to South Carolina, staff at NCAL took her in.

The accident caused injuries to Ally’s hips and hind leg, mangling one of her toes and giving severe entropion in her eye, all of which caused a lot of pain. She needed urgent medical attention to correct the entropion and remove the toe, which became infected. After months of trying different medications and treatment, it became clear that Ally needed to have her leg removed to relieve the phantom pain from her amputated toes. Thankfully, within a week after the amputation, Ally was no longer living in a cone and seemed much more comfortable! Throughout this entire process, Ally’s spirits remained high. She was always happy, people-friendly and ready to play, no matter what circumstances were thrown her way. However, despite being the apple of everyone’s eye, it took her a year of being overlooked, until ironically on the eve of Valentine’s Day 2018, Ally’s happily-ever-after came true!

Happy endings for stories like Ally’s, are only made possible thanks to your contribution to NCAL’s Emergency Medical Fund. It allows us to welcome especially vulnerable animals through our doors and provide them with the life-saving medical treatment, shelter, and care they need to go on to live a fulfilling life and do what dogs do best… LOVE.

Donate to NCAL’s Emergency Fund by completing in the donation form below or sending an email to: info@ncal.com. Or scroll to the bottom of the page for mailing information.

Come find your next best friend!

To date, North Country Animal League has taken in, cared for, and found homes for over 11,000 homeless animals. Connecting humans with animals is what we do best - whether it be through adoptions, education and outreach, or volunteer opportunities. We created this video to show you what you can expect when you come to NCAL to find your next best friend!