After a Life of Neglect, Trooper Finds Love 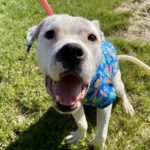 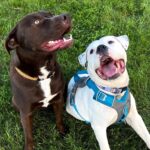 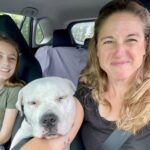 While out walking at the end of a country road in early May, a couple came upon what they feared was a dead animal laying in a ditch. When they got closer they found an extremely emaciated dog. Miraculously, he was still breathing. Severely malnourished and dehydrated, this poor dog barely had the strength to stand. The couple scooped him up and brought him to NCAL, where he was provided with immediate assistance.

We named this sweet boy Trooper in honor of his resilience in the face of a life of abuse and abandonment. We learned that Trooper spent his life in a dirty kennel in his own feces without access to the exercise, food, and water he needed. This is evidenced by his body and coat condition when he was found, as well as by first hand accounts from neighbors. On the first warm day of spring, Trooper found himself finally free, but cast out like a piece of garbage.

Trooper stayed at NCAL for a little over a month while he was medically monitored by our veterinarian and animal care team. He was brought up to a healthy weight through a regimented nutrition plan and gained strength through regular walks and enrichment activities. Trooper was deeply craving affection when he arrived and our animal care team were overjoyed to shower him in kisses and wrap him up in snuggles. With each passing day, Trooper became stronger and felt more space for joy to enter his life.

In early June, Trooper was placed in a foster home where he could continue to gain strength and learn how to be out in the world and interact with new people and environments. His foster family quickly fell in love with Trooper and decided they wanted to offer him a forever home with them. These days, Trooper enjoys walks with his mom, playdates at the dog park, snuggles with his siblings, and the security of a safe and loving home. His mom says, “His world is opening up and he’s all about it! ​​He has such a likable and curious personality that it’s been pretty impossible for me to resist snapping tons of pictures of him as he explores and learns about the world outside of his crate. He is such a lovable goober and I’m so honored to have him by my side.”

If you want to continue to follow Trooper’s new life and adventures, his mom made him an Instagram page. You can find Trooper (now Roger) at @4_the_love_of_trooper

NCAL is extremely grateful to everyone who supported Trooper’s care and cheered him on as he made progress. Thank you for helping us show Trooper that there is love in the world and he deserves all the love his heart can hold!

A trial for Trooper’s animal neglect case is being held in Lamoille County Criminal Court in July.