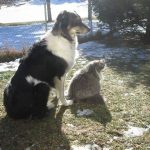 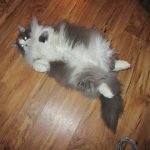 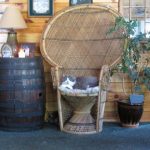 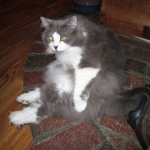 Dixie has had a wonderful 17 years in what was originally meant to be a temporary foster home. Today she reigns supreme as Queen Bee in her forever castle. She also plays the role of assistant dog trainer for her mom who is a volunteer for Therapy Dogs of Vermont by keeping her canine siblings in check.

“Dixie was my first foster about 17 years ago. After a very complicated pregnancy, she had three kittens – one normally, one after a shot of Oxytocin and for the third one she had to have a C-Section. She’s one tough kitty! She has also had diabetes for the past 7ish years. She gets a shot twice a day and she just takes it in stride. I can call her to “come get your shot” and she will come (not running, but strolling

) out to get it! She has never been afraid of anything, but I doubt she would have lasted very long as an outdoor cat! Dixie only weighs 9 pounds. That is all hair! I often refer to her as “The dog trainer,” because when a dog tries to chase her, she just sits there with a “SERIOUSLY?” look on her face and puts them in their place if needed. She is sweet and gentle, but she also rules the roost! Dixie truly is the best cat I’ve ever known – and I’ve had a lot of cats!!!”